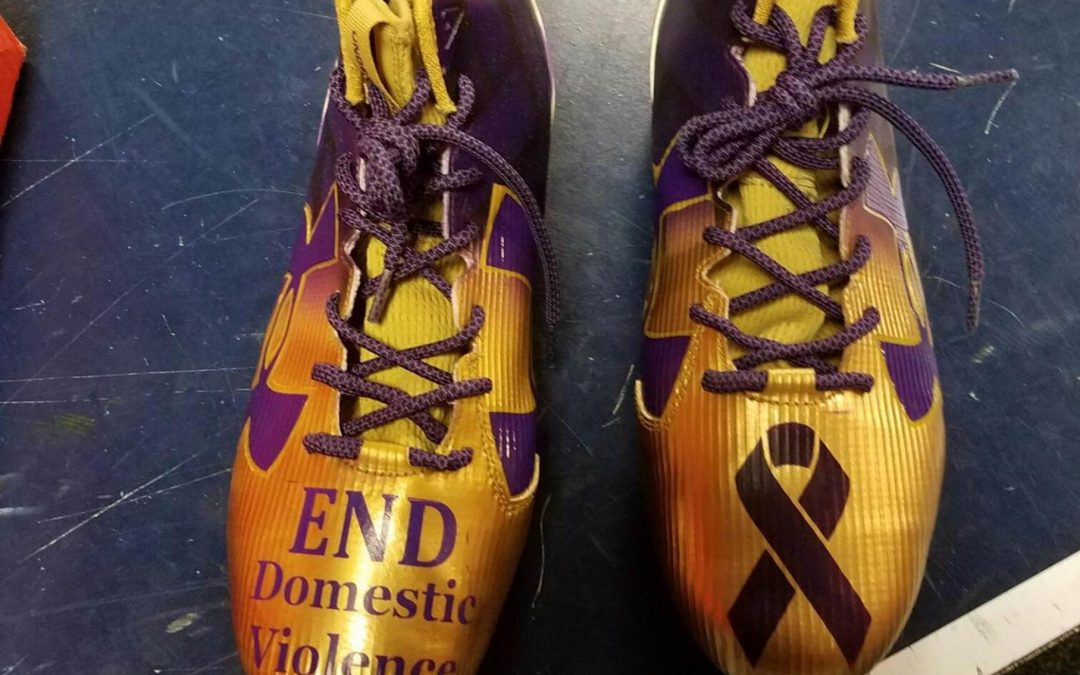 Baltimore, MD (December 8, 2016) – As a part of the My Cause, My Cleats campaign by the NFL, Baltimore Ravens wide receiver, Steve Smith Sr., will be raffling off his special purple and gold cleats with a purple ribbon,  worn during Sunday’s game on December 4th against the Miami Dolphins. All proceeds from the raffle will benefit House of Ruth Maryland.

The raffle for the game-worn cleats is now live online and tickets will be sold until noon on December 16. Individual tickets for the drawing are $10 or 3 tickets for $20 and can be purchased at https://app.mobilecause.com/form/nlpsZQ.

In addition to Smith Sr.’s on field message to stop domestic violence, he is committed to the cause outside of M&T Bank Stadium as well. Smith Sr. is this year’s Baltimore Ravens nominee for the Walter Payton NFL Man of the Year Award, recognizing the hard work of the NFL’s players both on and off the field, for his work with House of Ruth Maryland as well as with his own foundation, the Steve Smith Family Foundation, to help spread the message of domestic violence.

1 in 4 women will experience intimate partner violence at some point in her lifetime. In 2014, the Baltimore Ravens entered a three year partnership with House of Ruth Maryland and helped launch the “Man Up!” initiative. The team will donate $600,000 over the course of the partnership and will participate in a variety of educational programs including workshops focusing on intimate partner violence in the workplace, and abuse intervention programs which aim to increase the safety of victims of intimate partner violence by holding batters accountable while teaching non-violent relationship skills. The Man Up! objective is to shift the conversation and focus  to the source of the problem.  The Baltimore Ravens have helped lead this effort throughout Maryland and have encouraged all citizens, businesses and organizations to join in the initiative.

“We are thrilled to have the support of the Baltimore Ravens and Steve Smith Sr.,” said House of Ruth Maryland’s Executive Director Sandi Timmins. “Steve is helping to shine a light on domestic violence and is a role model for other men in the community to look up to, showing others how important it is to “Man Up!”